All of our volunteers have different stories and different reasons for why they decided to offer their time to the farm. We’re excited to introduce Stacey!

Update (20/04/2020): Stacey completed the Big Half, but then her other 2 half marathons as well as Tough Mudder have been rescheduled until later on in the year, due to the outbreak of COVID-19.

Not willing to simply sit at home and give up on her fundraising plans, Stacey has signed up to the #TwoPointSixChallenge, and will be completing a Local Landmark Solo Half Marathon, as well as doing 26 laps of the Vauxhall City Farm riding arena, with her best beloved alpacas Tom, Ben, and Jerry, in what we’ve been fondly calling… ALPACA LAPS NOW.

Donate to Stacey’s efforts on her Fundraising Page 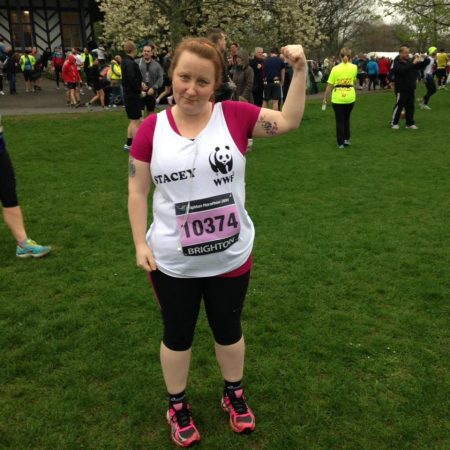 My name is Stacey and I will be running two half marathons in 2020 to fundraise money for Vauxhall City Farm, so I wanted to tell you a little bit about myself, and my passion for running and the farm.

Born in 1979 I grew up in a tiny village on the Scottish borders. It’s a beautiful area but I only really started to appreciate it once I moved away to Edinburgh when I was 17. I studied Architectural Technology and spent 12 years working in hospitality. Having been a restaurant manager in a few different places I moved to London in 2005. I’ve worked for Leon for the last 6 years, doing HR and Training in the last two of those.

While I love working in hospitality, it is not my dream job and I can be very stressful. I have battled with depression and anxiety for the last decade and it’s a battle that I think I am starting to win now, mainly thanks to finding things outside of work that I love, such as running and the farm.

My love for animals started very early. I adopted a donkey at a sanctuary, I’ve always loved elephants (somewhere at my parent’s house there’s still a cuddly elephant my brother bought me with his pocket money a long time ago), and then I fell in love with pandas after seeing them in Edinburgh zoo. I adopted Pandas through the World Wide Fund for Nature, which bizarrely is how I started running.

I was about 20kg heavier than I am now and I couldn’t even run for the bus and the WWF sent me an email saying I could get a ‘Panda made me do it’ shirt, if I ran the Brighton marathon for them. Before I had time to come up with excuses, I had signed myself and my dad up to run it!

I started training, got fitter and healthier physically, but mostly I realised the huge difference it made to my mental health, so I just kept going. I did the Brighton marathon twice for the WWF, and since then have ran a few half marathons for other charities close to my heart such as Key4Life – a charity I did mentoring work with young offenders, through working for Leon – and Alzheimer’s Research – my grandfather has dementia – and in 2018 I ran 3 half marathon’s for Mind.

In total I have run 2 full marathons and 6 half marathons now, all for charity.

In 2018 I took a trip back to Scotland, and my dad booked us an alpaca trek at a lovely little alpaca farm. We got to take 2 alpacas on a trek in the hills around the farm and it was love at first sight! As soon as I got back to London I googled where I could see alpacas near me, and Vauxhall City Farm popped up in the results.

I came to visit, but that wasn’t enough for me, so I adopted Ben, Tom, and Jerry, but that still wasn’t enough, so I signed up to volunteer at the farm. I originally said I could do 2 Sundays a month, but before long I was doing pretty much every Sunday of each month. I am determined to one day have my own alpacas, but for now I will have to be satisfied with the tattoo of my three boys on my arm. 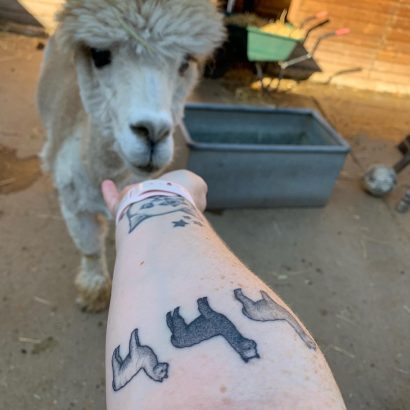 It was ben who caught my eye the most at first, but soon I noticed Jerry being rather inquisitive and a little bribery with some food treats later he was starting to come up to me, and he even gives me kisses sometimes. It’s hard to explain, but there is something about animals that makes me feel calmer, happier and more centred. My friends always question why I give up my Sundays to work at the farm for free, but it genuinely doesn’t feel like work, and I go to work on a Monday feeling much more relaxed and refreshed, than if I had spent all of Sunday in bed.

There is something truly magical about the farm. All the volunteers and staff are so friendly and fun to work with. I have always said I fall in love with every animal I meet, it’s just humans that I struggle with, but everyone at the farm is helping me with that!

So in honour of Ben, Tom, and Jerry I am running the Big Half and the Hackney Half, although as I type this I am considering signing up for the Edinburgh half as well. And one day it’s my dream to run the London Marathon. Let’s see if the boys will inspire me to achieve that dream in the coming years!

Find out what Vauxhall City Farm has on offer for workplaces and their employees, including our onsite Café and volunteering opportunities.
Read more

With extensive experience of on-site & on-set filming, Vauxhall City Farm offers a great location and some highly-trained actors (animals) for projects of all shapes and sizes.
Read more

Site developed by Qlic IT