Tom, Ben and Jerry are definitely the stars of Vauxhall City Farm, however alpacas can be very shy and it takes time to earn their trust!

Alpacas originally come from South America and are kept for their fine, soft wool. Their wool is much like sheep’s, but warmer and not so itchy! Because Alpaca wool doesn’t contain lanolin (a natural grease found in sheep’s wool) it is hypoallergenic. It can also be processed without the need for high temperatures or harsh chemicals in washing.

Alpacas are intelligent, enquiring and sensitive. They also make great guard animals and farmers will often have a couple in amongst their sheep to chase off foxes and dogs.

It is their intelligence and curious nature, that make it possible to train them. Tom, Ben and Jerry have had many starring roles in TV and movies. Their most exciting project to date is probably being alien farm animals on planet Jakku, in Star Wars – The Force Awakens. 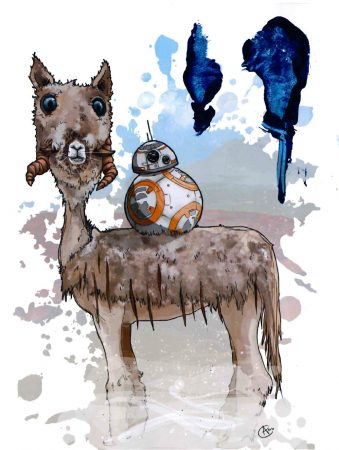 They are being led across the desert when we first visit the planet, right at the beginning of the movie, as BB8 gets to the top of the hill, in his opening shot. You’re going to need to look very cosely to see them but we think it’s definitely worth a rewatch!

Huge thank you to Alice Cheetham for this interpretation of our description of the alpaca costumes, signed by our very own Jerry!

We often get asked if our alpacas are llamas, in fact they are very different animals. Unlike llamas, alpacas are not very strong and can’t carry heavy weights. Llamas also don’t have the lovely soft wool of an alpaca, they have rough, coarse fur.

There are a lot of similarities though, both alpacas and llamas are part of the camelid family and are related to camels, vicuna and guanaco.

Did you know that you can support the farm by adopting our animals? Why not adopt the alpacas?

Check out the wonderful alpaca products we sell!

Submit an enquiry through this form and we will get back to you as soon as possible...
Read more

Become a Rat Ambassador to bust some myths about our radiant rodent friends.
Read more

Thank you for contacting us